Could One Physical Test Be An Accurate Predictor of Early Death?

Home/Blog/Could One Physical Test Be An Accurate Predictor of Early Death?

Could One Physical Test Be An Accurate Predictor of Early Death?

Want to reduce your risk of all-cause mortality by 21%?

It is certainly an intriguing concept to think that one single physical test could be predictive of all-cause mortality. But is the test reliable and if so what are the reasons why it can predict your risk of dying prematurely? 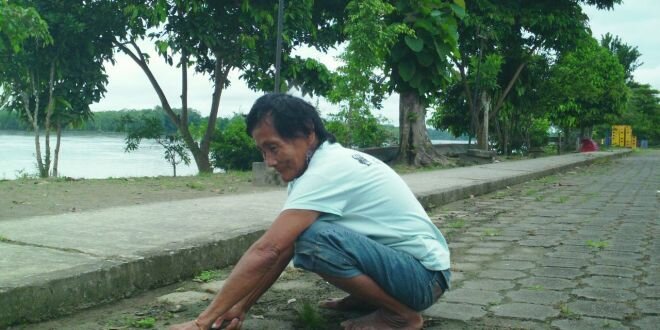 I found this article particularly interesting because 16 years ago when I began practising as a physiotherapist I set a challenge for one of my very first clients. At the time ‘John’ was 70 years old and came to me for chronic lower back issues. After getting him ‘clinically clear’ (pain-free and dysfunction free) I then used a range of corrective exercises to help restore full functional movement. I then set a larger goal for John, “I want you to be able to complete these same 10 tests in 10 years from now.”

Now for a 70 year old who was already in good shape and playing golf and tennis, this seemed like a very easy test to complete.  Little did we both know that we would still be working together 16 years later and have the opportunity to complete this test every year for 16 years.

You likely have two questions at this time:

1.Can John still complete this test now that he is 86 years old?

Yes, John has been diligent in looking after his physical health and functional movement patterns during this time and can complete this test quite easily. The only test that poses a slight challenge is the two-foot jump up onto a 20cm aerobics step.

It’s worth noting that at 86 years old John has stated that he is the only one of his friends who can complete all of these tasks. In fact many of them find it difficult to pick something up off the floor, stand up from sitting, or climb a set of stairs.

2.Is John suffering from ill health of any kind?

For privacy reasons I will not list the health challenges that John has faced and overcome in the last 16 years. With that said, the article being discussed looks at all-cause mortality in relation to functional ability, not prevalence of disease. And John is certainly alive and active in the community at 86 years old with no end in sight.

Ability to sit and rise from the floor as predictor of all-cause mortality.

Watch a quick Introduction of the Sit to Rise Test.

The authors of this study felt that a decline in health-related physical fitness may be responsible for this increase in all-cause mortality.

I certainly feel that a simple Sit-To-Rise Test (SRT) could be an accurate predictor of all-cause mortality for subjects 51 to 80 years old, however for reasons that are far more in-depth than what has been discussed by these authors.

The Body Genius Institute developed the concept of the performance pyramid after nearly two-decades of clinical experience. Thousands of Body Genius (BG) clients have benefitted from the Performance Pyramid and the simple concepts it represents. I feel as a practitioner that it’s important to continually remind myself of the importance of satisfying each level of the pyramid before moving on to higher levels. I have solved many challenging cases simply by starting at the base level (HEALTH) and working my way upward. Similar to climbing a ladder! 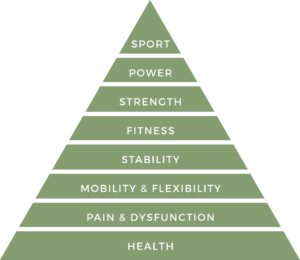 For a more in-depth review of The Performance Pyramid simply download the free e-book available from this blog.

If we consider The Performance Pyramid in relation to this article, then anyone scoring less than eight (8) on the SRT is likely to be lacking in the mobility and flexibility, stability, fitness and strength levels of the pyramid.

The authors of this study aimed to eliminate the ‘Pain and Dysfunction’ level of the pyramid by screening out subjects that presented with any relevant musculoskeletal limitations that could affect the SRT. Likewise they aimed to eliminate the ‘Power’ and ‘Sport’ levels of the Pyramid by screening out any subjects who regularly competed in sports events. As such we end up with a Pyramid that looks like this. 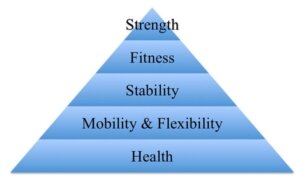 The challenge I have with this study is not whether its findings are accurate or not. In other words, I believe the SRT can accurately predict the risk of all-cause mortality in subjects 51 to 80 years old.  My challenge is with their discussion of why the SRT is an accurate tool for predicting all-cause mortality. Their discussion focuses solely on the ‘Mobility and Flexibility’, ‘Stability’, ‘Fitness’, and ‘Strength’ levels of the pyramid in an attempt to explain why people with low scores exhibit a 5-6 times higher risk of dying. What the authors failed to discuss was whether the SRT, despite its simplicity, is actually a powerful predictor of underlying health challenges.

Upon careful assessment, each subject with a low score may be evaluated and deemed to be lacking in different levels of the pyramid: Poor mobility and flexibility, weak stability and balance, poor aerobic or muscular endurance (fitness), and/or a decline in muscle mass or changes in muscle fiber type (strength).  But what needs to be considered is whether these changes in the musculoskeletal and neurological systems are reflective of stress, inflammation or disease in the other systems of the body.

Systems of the Body

For greater clarification on this point we can turn to the excellent work of healing guru Paul Chek and his scientifically proven totem pole concept. Which from the top down flows through Respiration, Mastication, Vision, Balance, Hearing/Listening, Upper Cervical Function, Visceral Function, Limbic/Emotional Relationships, The Sacrum and its relation to the central nervous system and The Slave Joints.

When Paul Chek makes reference to the “Slave Joints” of the body he is referring to:

Obviously when completing the sit-to-rise-test (SRT) these slave joints come into play and any restrictions or functional limitations in the slave joints would compromise the subject’s ability to complete the task resulting in a lower score. This point should be obvious to most people. However, what may not be as clear or widely understood is that these slave joints and their ability to function is heavily influenced by the systems above in the totem pole.

Paul Chek has stated that … “problems in any of the slave joints are most commonly the result of compensation stress from changes made by the central nervous system to keep you alive.” Paul goes on to say that … “most problems in the slave joints are the result of problems that have not been identified and addressed in the higher order systems depicted in the Chek Totem Pole (CTP).”

Returning to the study, one has to consider whether the SRT is not only a reflection of the health of the musculoskeletal and neurological systems but also the higher order systems as reflected in the CTP.  Although ‘compensation stress’ in the ‘slave’ joints may be limiting performance on the SRT it may indeed be a deeper reflection of the subjects overall health status. And this may be why the SRT has been proven to be an accurate predictor of all-cause mortality.

One limitation of the study discussed by the authors is that the SRT cannot predict the cause of mortality – stroke versus heart attack versus cancer versus autoimmune disease. What this may suggest is that the SRT can predict that there are challenges at the base of The Performance Pyramid (Health) or in the higher order systems as presented in the Chek Totem Pole. However, it cannot tell you what system(s) is/are inflamed or diseased and as such cannot predict the likely cause of mortality.

But certainly a low SRT score should be a strong motivating factor to investigate all other systems within your body and make the necessary changes needed to improve your score to eight, nine or ten out of ten!

The authors of this study expressed that although a higher score on the SRT (8-10) demonstrated a lower risk of death, they were unable to quantify whether there was an increased quality of life associated with these higher scores. One would certainly think that a subject who scores well on the SRT (8-10) is also more likely to be able to walk, golf, play tennis, garden and go on vacations more easily. However, this may not be reflective of their level of happiness (social, emotional, mental and spiritual health).

Likewise, the authors stated that they were unable to determine whether higher scores on the SRT (8-10) enhanced the subject’s ability to carry out activities of daily living. One may question whether someone suffering from cognitive decline could still achieve a good score (8-10) on the SRT and yet find it difficult to perform activities of daily living with any level of proficiency.

My only criticism of the sit-to-rise test (SRT) is that it may give a false sense of security in some instances. If we return to my client “John”, his ability to complete the SRT with an 8-10/10 score may have suggested to us both that his risk of pre-mature death was low. And certainly 16 years later he is still alive at 86 years old with no signs of dying anytime soon. This may indeed be another example of the power of the SRT. However, the SRT would not have been an accurate predictor of his risk for disease – John has suffered from a range of diseases in the last 16 years. If we had searched further up the Chek Totem Pole or searched more thoroughly at the base (Health Level) of the Performance Pyramid, we likely could have prevented many of these diseases from occurring.

So the SRT may be an accurate predictor of all-cause mortality, however this should not be taken as a predictor of your risk for disease.

The team at the Body Genius Institute believes that the Performance Pyramid and the concepts it represents should be applied to everyone. Though many of our clients do not participate in competitive sport, they still need to satisfy the basic requirements of each level of the pyramid on their return to physical activity.